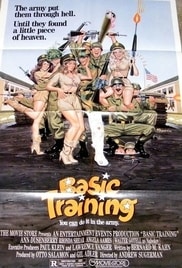 Basic Training (1985) Online Watch Movie.
Directed by: Andrew Sugerman.
Released: 1985.
Runtime: 84 min.
Genres: Comedy.
Countries: USA.
Language: English.
Also Known As: Up the Pentagon, Up the Military.
Movie Info: IMDb.Actors: Ann Dusenberry, Rhonda Shear, Angela Aames.
Plot: Melinda comes to Washington DC to visit her friend Debbie, and to find a job in government, where she hopes to do her part to make it better. She gets a lower echelon administrative position at the Pentagon, and finds things pretty slack. Her boss seems to be more interested in getting into her pants than trying to find lost data on the Russians. Melinda resists his advances and begins working her way up in the Pentagon, finding subtle ways of getting her policies implemented by manipulating the slovenly males that populate the Pentagon, including finding a way to defuse the mounting conflict with the Russians….