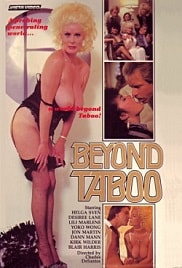 Beyond Taboo (1984) Online Watch Movie.
Directed by: Charles Webb.
Released: 1984.
Runtime: 85 min.
Genres: Drama.
Countries: USA.
Language: English.
Movie Info: IMDb.Actors: Helga Sven, Desiree Lane and Lili Marlene.
Plot: A mother catches her son with the Asian maid. The two compensate the mother by seducing her. Meanwhile, the chauffeur sees the buxom daughter finding an unusual use for the hand shower. Though covering up herself at first, she accepts his offer of assistance. The father dates his younger submissive secretary. The mother tells her brother what happened, but ends up fulfilling his own fantasy regarding his buxom sister. While the daughter seduces her cooperative father, the other members group in the living room. The mother is with her son again, while her brother is with the maid. Finally, the father and daughter are surprised to discover what’s happening in the living room, but are quickly convinced to join in..