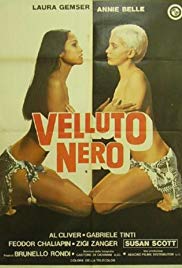 Directed by: Brunello Rondi.
Released: February 1978.
Runtime: 94 min.
Genres: Drama, Romance.
Countries: Italy.
Language: Italian.
Also Known As: Black Emanuelle, Emanuelle in Egypt, Velluto nero.
Movie Info: IMDb.
Actors: Laura Gemser, Annie Belle, Al Cliver, Gabriele Tinti, Feodor Chaliapin Jr., Ziggy Zanger, Nieves Navarro, Tarik Ali.
Plot: Laura Gemser plays a beautiful model who is constantly being abused by her photographer boyfriend (Gabriele Tinti). The two find themselves in Egypt where they encounter various strange folks including the daughter (Annie Belle) of a sexually frustrated woman and another pervert (Al Cliver) who tries to come off like a Jesus-type figure. Again, there’s really not too much going on here in terms of an actual story and in the end it pretty much hurts the film but to be honest, Emanuelle films, no matter what country they were coming from, dealt with stories too well. This film has a few good things going for it but just not enough to make it worth sitting through the 94-minute running time. There are a few campy moments including one early on where the abusive boyfriend makes Gemser pose next to a rotting dog. What this had to do with anything or the reason for it is beyond me but seeing the beautiful Gemser next to a dead dog was kind of weird to say the least.