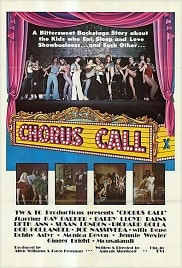 Chorus Call (1979) Online Watch Movie.
Directed by: Antonio Shepherd.
Released: 1979.
Runtime: 78 min.
Genres: Drama, Musical.
Countries: USA.
Language: English.
Also Known As: Gymno balleto.
Movie Info: IMDb.Actors: Kay Parker, Darby Lloyd Rains and Beth Anna.
Plot: An erotic look at the casting process for a Broadway stage show. Cheryl Cooper is a veteran dancer who wants to be cast for a part, but is held back by the vindictive choreographer Bertha, whom she had a past tryst with. So, Cheryl resorts to seducing the director Sidney to land a part. Meanwhile, the sleazy producer Ed has sexual encounters with every woman he meets, while Manny, the financial backer, clashes off against Rue, an egoistical local talent agent who is trying to cast the popular Mona Randall for the lead in the play, while Mona has a meeting of minds and bodies with Manny’s business partner, Frank, to ensure that she land the lead..