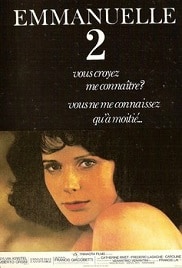 Directed by: Francis Giacobetti.
Released: December 15, 1975.
Runtime: 83 min.
Genres: Drama, Romance.
Countries: France.
Language: French (Eng-Sub).
Also Known As: Emmanuelle II.
Movie Info: IMDb.
Actors: Sylvia Kristel, Umberto Orsini, Frédéric Lagache, Catherine Rivet, Henri Czarniak, Tom Clark, Florence Lafuma, Eva Hamel, Christiane Gibeline, Laura Gemser, Claire Richard, Caroline Laurence, Venantino Venantini, Jean-Pierre Nam, Marion Womble.
Plot: Emmanuelle 2 stands out as one of the very best of it’s kind. Artfully rendered, beautifully photographed love/sex scenes, that really pushed the limits on just how far a film could go. This is a sequel to one of the most successful erotic movies of all time. I can report, in all honesty that is is a rare instance where a sequel is better than the original. While the first “Emmanuelle”, filmed by Just Jaeckin, is somehow dark, and murky, Emmanuelle 2 is bright, and filled with life, and with genuine eroticism. Obviously this feature had a much larger budget than it’s predecessor, and it shows. The viewer was introduced to the infamous “Emmanuelle” character in 1974. She was a shy, quiet girl of 19, married to an older man, who had very different views of sex. In that film we witnessed the beginning of her sexual awakening. In this sequel we see Emmanuelle developed into an incredibly strong, liberated woman, who goes about her sexual conquests like a drunken sailor! Sylvia Kristel sets the screen on fire with her unique brand of sexuality, which i can’t quite describe.