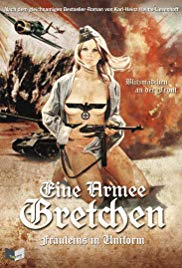 Directed by: Erwin C. Dietrich. Released: August 24, 1973. Runtime: 96 min. Genres: War. Countries: West Germany. Language: English. Also Known As: Frauleins in Uniform, Eine Armee Gretchen. Movie Info: IMDb. Actors: Elisabeth Felchner, Karin Heske, Renate Kasché, Carl Möhner, Helmut Förnbacher, Alexander Allerson, Hasso Preiß, Birgit Bergen, Milan Beli. Plot: Frauleins in Uniforms (AKA She Devils of the SS) features none of the mean-spirited nastiness and sexual degradation that is generally associated with the Nazisploitation genre; instead, it uses its German wartime setting as an excuse to get its more-than-willing frauleins out of their uniforms and onto their backs as often as possible, the lovely ladies doing whatever is necessary to assist with the Nazi war effort. Boasting a very attractive female cast most of whom get buck naked, plus better than average production values (that allow for the occasional ambitious battle scene, complete with authentic looking weapons and tanks), this had the potential to be a fun slice of sleazy trash, but with flat direction from Erwin C. Dietrich and nary a plot to tie the unimaginative soft-core sex and fighting together, the whole sorry affair proves tedious in the extreme. Download Frauleins in Uniform AKA She Devils of the SS (1973) Full Movie Online Server 1: Fembed Download Link