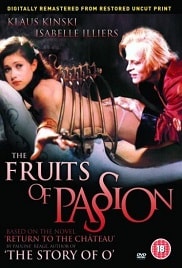 Fruits of Passion / Les fruits de la passion (1981) Online Watch Movie.
Directed by: Shûji Terayama.
Released: 1981.
Runtime: 79 min.
Genres: Drama.
Countries: France.
Language: English.
Movie Info: IMDb.Actors: Isabelle Illiers, Klaus Kinski, Arielle Dombasle.
Plot: A girl loves a rich and much older man (played by Kinski). She is willing to do everything he wants to show her love, but he is playing a sick game with her. As part of this game he sends her to a Chinese brothel. A poor young boy sees her and falls in love with her. To get the money needed to sleep with her, he joins “the revolution”. Additionally the movie shows the fate of some of the other prostitutes.