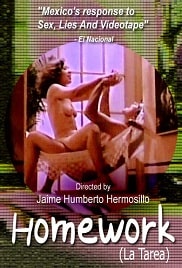 Homework / La tarea (1991) Online Watch Movie.
Directed by: Jaime Humberto Hermosillo.
Released: 1991.
Runtime: 85 min.
Genres: Comedy, Drama.
Countries: USA.
Language: English.
Movie Info: IMDb.Actors: María Rojo, José Alonso.
Plot: Adult film student Virginia (Maria Rojo) hides a professional video camera in the corner of her studio, for the purpose of secretly recording the entire visit of Marcelo (José Alonso), a man she had a brief affair with four years before. She maneuvers him into the right place and eventually confesses that she invited him for sex; he thinks that’s a great idea but neither of them have a condom. Much discussion of sexual anxiety follows, and it looks like the deed is about to be recorded on tape, when Marcelo suddenly realizes that that camera in the corner is activated and rolling tape .