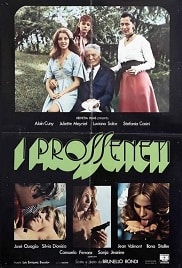 I prosseneti / The Panderers (1976) Online Watch Movie.
Directed by: Brunello Rondi.
Released: 1976.
Runtime: 90 min.
Genres: Drama.
Countries: Italy.
Language: Italian.
Movie Info: IMDb.Actors: Alain Cuny, Juliette Mayniel, Luciano Salce.
Plot: David and his wife Gilda transform their beautiful villa in a brothel, which are home to several characters. Odile, the daughter of a woman tortured by mercenaries, meets in the villa one of the torturers and want to relive over his own body the suffering endured by the mother. An ambassador who was abandoned by his companion, imposes its new partner to take his place. An eighteen year old, very open-minded, staged an orgy.