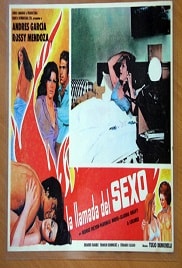 La llamada del sexo (1977) Online Watch Movie. Directed by: Tulio Demicheli. Released: 1977. Runtime: 82 min. Genres: Thriller. Countries: Spain. Language: Spanish. Also Known As: Dulcemente morirás por amor. Movie Info: IMDb.Actors: Andrés García, Rossy Mendoza, George Hilton. Plot: Our man George Hilton is a crooked marketing executive, who screws anything with boobs that moves, mostly his publicity models. He wants to divorce his rich wife, but she doesn’t want to give 50% of her fortune, so she hires a private dick that gets Hilton in the act with one of the agency models. With the photos of his indiscretion, he forgets about the divorce. Then the film gets a strange twist, Hilton speaks with a friend that has some kind of psychic powers that able him to guess the future, he predicts some nasty stuff happening to our hero’s life, and then strangely those predictions really start to happen.... Download La llamada del sexo (1977) Full Movie Online Server 1: fembed Download Link