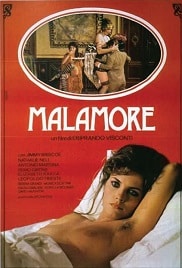 Malamore (1982) Online Watch Movie.
Directed by: Eriprando Visconti.
Released: 1982.
Runtime: 93 min.
Genres: Drama.
Countries: Italy.
Language: English.
Also Known As: La casa rosa.
Movie Info: IMDb.Actors: Jimmy Briscoe, Nathalie Nell, Antonio Marsina.
Plot: Set in Northern Italy during the 1st World War. Marcello is a dwarf who is kept hidden by his family and falls in love with a prostitute from the local brothel. The prostitute’s lover plots to kill the dwarf, but she helps him to escape, though at a cost to her own well-being that did not seem to have been in the cards.