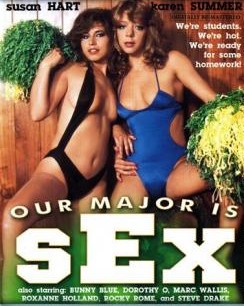 Directed by: Jack Remy.
Released: 1984.
Runtime: 72 min.
Genres: Comedy.
Countries: USA.
Language: English.
Also Known As: Nachhilfe in Sachen Sex.
Movie Info: IMDb.
Actors: Bunny Bleu, Susan Hart, Dorothy Onan, Karen Summer.
Plot: Two sorority sisters, Alice and her friend, become horny from too much studying and no play, so they first spend some wild quality time together and then seduce the pizza delivery guy. Afterwords, the guy calls his friend to brag about the day he had, which reminds his friend about the time he worked as a gardener for a rich family and how their daughter seduced him one weekend, when her folks were out of town with her friend joining him later. Back at the sorority house, the two sorority sisters are having trouble with the philosophy exam. Alice sees an ad from what later turns out to be a completely fake school that offers lessons, so she calls them up. The “school’s dean” and his female “student” are actually just a couple of swindlers, who agree to come to the girls’ house and teach them. Thankfully, it turns out that what the girls really want from them is to seduce them.