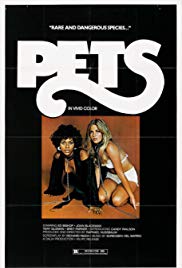 Directed by: Raphael Nussbaum.
Released: February 1974.
Runtime: 101 min.
Genres: Drama.
Countries: USA.
Language: English.
Also Known As: Submission, Pets.
Movie Info: IMDb.
Actors: Ed Bishop, Joan Blackman, Candice Rialson, Teri Guzman, Frank Parker, Matt Green, Mike Cartel, K.T. Stevens, Roberto Contreras, Berry Kroeger, Rodney Wallace, George Wells, Chuck Wells, Yvonne Alaniz, Walton Dornisch.
Plot: PETS is a film that tells you a little of what to expect just by looking at its poster. The poster with a scantly clad lady is clearly telling people that they’re walking into a sexploitation film but if you’re expecting all T&A and nothing else then you might be disappointed because PETS actually tries to be a character study and I think for the most part it works well. There’s no doubt that the greatest thing about the picture is the performance of Rialson. Is she in the same league as Meryl Streep? Of course not but then again this type of film isn’t asking for that type of performance. I thought the actress was very believable in the part and there’s no question that she was very easy on the eyes and this here made the sexploitation works flawlessly. Her character has to act with several others and there’s no doubt that Rialson just controls the film throughout.