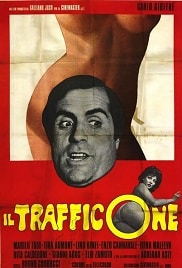 Sexual Counselor / Il trafficone (1974) Online Watch Movie.
Directed by: Bruno Corbucci.
Released: 1974.
Runtime: 99 min.
Genres: Comedy.
Countries: Italy.
Language: Italian.
Also Known As: O sexotherapeftis.
Movie Info: IMDb.
Actors: Carlo Giuffrè, Marilù Tolo, Tina Aumont.
Plot: A Neapolitan magliaro away to Rome, as he tries to sell a coat of fake reindeer, by chance meets a woman at a traffic light Roman aristocracy, who invited him to his house. Between the two is first sex, but the unexpected arrival of her husband, will be the beginning for the magliaro, a rich new work based on the search for solutions to the problems of sexual couples!.