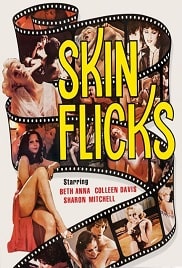 Directed by: Gerard Damiano.
Released: June 27, 1981.
Runtime: 85 min.
Genres: Crime, Drama.
Countries: USA.
Language: English.
Also Known As: Skin Flicks.
Movie Info: IMDb.
Actors: Colleen Anderson, Beth Anna, Sharon Mitchell, Jamie Gillis, Tony Hudson, Jill Monroe, Dory Devon, Herschel Savage, Tony Mansfield, Beerbohn Tree, Victoria Corsaut, Gina Harlow, Joey Silvera, Joan Parker, Robert Kerman.
Plot: Tony Hudson plays adult film director Harry, a man who is ten days behind schedule on his current film and his bosses (the Mob) want a finished product. Harry is struggling with life because he wants to do something other than just a sex picture and this is starting to have an impact on his actress/girlfriend (Susan (Sharon Mitchell). While watching SKIN-FLICKS you can’t help but notice the various things that director Gerard Damiano was trying to say and get across. There’s a lot of interesting things dealing with the behind-the-scenes making of an adult picture but this film mainly works because of its story, which is basically a director not being happy because they’re unable to expand and do something that they really want.