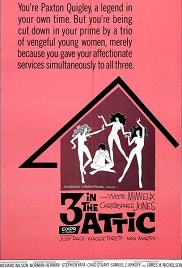 Three in the Attic (1968) Online Watch Movie.
Directed by: Richard Wilson.
Released: 1968.
Runtime: 91 min.
Genres: Comedy, Drama.
Countries: USA.
Language: English.
Also Known As: La chiave, La llave secreta.
Movie Info: IMDb.
Actors: Christopher Jones, Judy Pace, Yvette Mimieux.
Plot: In the swinging sixties three girls discover they have the same boyfriend who has been playing around with them all while vowing fidelity to each. To teach him a lesson he won’t forget, the trio contrive to lock him up and continually favour him with their attentions in turn..