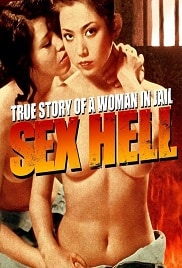 True Story of Woman in Jail Sex Hell (1975) Online Watch Movie.
Directed by: Kôyû Ohara.
Released: 1975.
Runtime: 72 min.
Genres: Drama.
Countries: Japan.
Language: Japanese.
Also Known As: Jitsuroku onna kanbetsusho: sei-jigoku, Sex Hell, True Story of Woman Condemned: Sex Hell,.
Movie Info: IMDb.Actors: Hitomi Kozue, Meika Seri and Maya Hiromi.
Plot: A group of young women is thrown into a horrible juvenile hall, due to their illegal acts. They soon wish they were back on the outside, as a gang of inmates subjects this “fresh meat” to the horrors of being locked up. Mayumi, a new inmate with a mysterious past, stands up for herself and fights back! NO ONE is going to push her around, and she hatches an escape plan to seek revenge on the person who had her incarcerated.