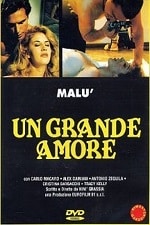 Director: Ninì Grassia, Stars: Malù, Alex Damiani, Antonio Zequila, Cristina Barsacchi, Carlo Macaro, Pietro Cifone, Axel Kohl, Annarita Verdesca, Giuseppe Forti, Rosa Norcia, Giuseppe Torricone, Daniela Petrachi, Gennaro Mambelli, Carlo Granchi, Marilida Tedesco. IMDb
Also Known As: Un grande amore.
Un grande amore: Two couples meet at a spa when they realize their respective suites share a bathroom. Joe is there with his wife Fay so he can relax from his work and recover his stamina for Fay’s sexual demands have made him practically impotent. As for Nick and Lucy, she is always at his throat for her jealousy makes every other woman into a potential rival. It is not until a third couple arrives to the spa that the real trouble starts.