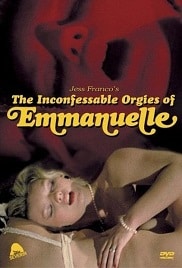 Emmanuelle Exposed (1982) Online Watch Movie.
Directed by: Jesus Franco.
Released: 1982.
Runtime: 83 min.
Genres: Drama.
Countries: Spain.
Language: Spanish.
Also Known As: Las orgías inconfesables de Emmanuelle.
Movie Info: IMDb.Actors: Muriel Montossé, Antonio Mayans and Asunción Calero.
Plot: Emmanuelle is recently reunited with her husband, but at the next party, she gets drunk and strips nude for his friends. He returns to his lover. Later, a sober Emmanuelle tries to redeem herself, but her husband refuses to forgive. She travels to see him, gets raped on the way by two delinquents, and enters a life of vicious sex to forget him.