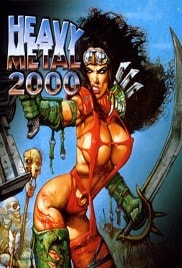 Heavy Metal 2000 (2000) Online Watch Movie.
Directed by: Michael Coldewey, Michel Lemire.
Released: 2000.
Runtime: 87 min.
Genres: Animation, Action, Adventure, Fantasy, Sci-Fi.
Countries: Canada.
Language: English.
Also Known As: F.A.K.K.2, Heavy Metal: F.A.K.K..
Movie Info: IMDb.Actors: Michael Ironside, Julie Strain, Billy Idol.
Plot: Upon discovery of a shard of what could be the Loc-Nar, a miner named Tyler who becomes possessed by an insatiable hunger for power and a thirst for immortality. On his way to the planet of youth, Tyler wipes out most of a space colony and kidnaps a sexy woman. His big mistake is that he doesn’t kill the woman’s sister, Julie, who then sets out on a mission of rescue and revenge.