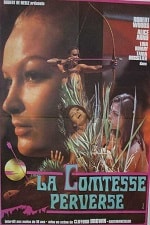 La Comtesse Perverse (1974) Online Watch Movie.
Directed by: Jesús Franco.
Released: December 10, 1975.
Runtime: 76 min.
Genres: Drama, Thriller.
Countries: France.
Language: French.
Also Known As: Sexy Nature, Les croqueuses, Countess Perverse, The Perverse Countess.
Movie Info: IMDb.
Actors: Tania Busselier, Howard Vernon, Robert Woods, Alice Arno.
Plot: Sylvia, a young and rather arrogant girl is on vacation in the south of France. She has an appointment with the handsome Tom. But Carole, her friend warns her about the possible intentions of the unhealthy young man. He is an odd person who works for Count and Countess Zaroff. She is invited by the latter to their secluded villa on an island for a meal. What she doesn’t know is that the couple have devilish leisure activities.