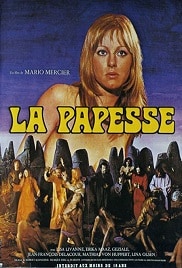 La papesse aka A Woman Possessed (1975) Online Watch Movie.
Directed by: Mario Mercier.
Released: 1975.
Runtime: 94 min.
Genres: Horror.
Countries: France.
Language: French.
Movie Info: IMDb.Actors: Jean-François Delacour, Geziale, Lisa Livane.
Plot: Laurent, who is married, decides to delve into the arts of black magic and decides he wants to be initiated into the darkest sect for which he must undergo certain rituals. Laurent is told by the powers of the sect that in order for him to completely join them, he must have his wife Aline join as well. Aline then finds herself in a series of events destined to break her mental structure.