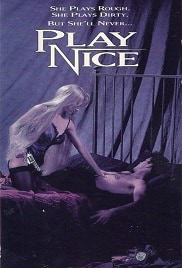 Play Nice (1992) Online Watch Movie.
Directed by: Terri Treas.
Released: 1992.
Runtime: 91 min.
Genres: Thriller.
Countries: USA.
Language: English.
Also Known As: Desideri perversi, Juego inocente, Kuolettava esileikki.
Movie Info: IMDb.Actors: Ed O’Ross, Louise Robey and Michael Zand.
Plot: Most of what you’ll remember from this movie is the love making scenes between Robey and Ed O’Ross. Those were very long, explicit scenes. And gosh, were they steamy! You’ll also remember the devestating final showdown between the detective and the killer at the end. The story involves a detective (O’Ross) who is hot on the trail of a serial killer who preys on men who sexually abused their daughters. A lady from the records department (Robey) assists, and they fall in love. That just about covers it. You might like it if you like cat-and-mouse detective chase stories.