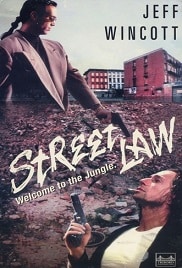 Street Law (1995) Online Watch Movie.
Directed by: Damian Lee.
Released: 1995.
Runtime: 87 min.
Genres: Action, Drama.
Countries: USA.
Language: English.
Also Known As: Law of the Jungle.
Movie Info: IMDb.Actors: Jeff Wincott, Paco Christian Prieto, Christina Cox.
Plot: A martial arts-trained lawyer (Jeff Wincott) is forced to fight in illicit matches after he is framed for a crime, is dismissed from his firm, and all his assets are tied up, including his clothing and furniture after he is evicted from his apartment.