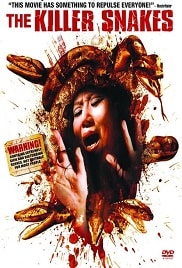 The Killer Snakes (1975) Online Watch Movie.
Directed by: Chih-Hung Kuei.
Released: 1975.
Runtime: 99 min.
Genres: Drama, Horror, Thriller.
Countries: Hong Kong.
Language: English.
Also Known As: Se sat sau, As Serpentes do Mal, The Hiss of Death.
Movie Info: IMDb.Actors: Kwok-Leung Gan, Lin Lin Li, Chun Chen.
Plot: A young man who has been beaten, abused, humiliated and laughed at all his life finds that he has an unusual empathy with snakes. He can talk to them and they understand him, and eventually he finds that he can get them to do his bidding. He decides to use his newfound friends to take his revenge on everyone who ever did him wrong.