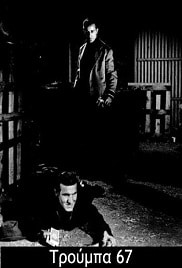 Trouba 67 (1967) Online Watch Movie.
Directed by: Grigoris Grigoriou.
Released: 1967.
Runtime: 72 min.
Genres: Drama, Thriller.
Countries: Greece.
Language: Greek.
Also Known As: Amartoles gynaikes stin Trouba.
Movie Info: IMDb.Actors: Giorgos Foundas, Ketty Theohary, Betty Arvaniti.
Plot: A night watchman falls for a nightclub singer in Troube, and convinces her to stay with him and leave the world of the night. She, however, when he discovers that they are poor, returns to his old life and gets involved in a drug trafficking case, which moves the boss. The night watchman would try to save the girl, but the gang scuffle with police, his beloved falls dead.