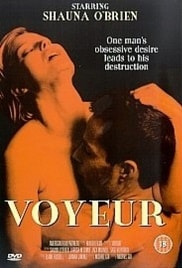 Voyeur (1999) Online Watch Movie.
Directed by: Michael Goi.
Released: 1999.
Runtime: 86 min.
Genres: Drama.
Countries: USA.
Language: English.
Movie Info: IMDb.Actors: Lorissa McComas, Shauna O’Brien, Jack Maxwell.
Plot: Andy works in the night-shift making copies of videotape. His best friend Lou got the job for him, and asks Andy to make nine copies of a porn video. Andy becomes obsessed by the star, affecting his personal life with his girlfriend Kris Foster. When Andy incidentally meets the woman, she tells that she is Gina Porter, the daughter of a senator, and she had been drugged and videotaped and later blackmailed by the powerful Melrose. Andy gets involved with the situation, and when he meets Melrose, he listens to a different version of the story, becoming confused.