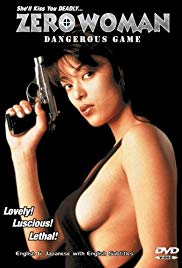 Directed by: Hidekazu Takahara, Arlen Tarlofsky.
Released: May 01, 1998.
Runtime: 79 min.
Genres: Drama, Thriller, Crime.
Countries: Japan.
Language: Japanese.
Also Known As: Zero Woman: Abunai yûgi.
Movie Info: IMDb.
Actors: Chieko Shiratori, Ichiho Matsuda, Terunori Miyazaki, Ken Miyawaki, Daisuke Ryû, Masayoshi Nogami, Shirô Shimomoto, Keizo Nagashima, Tadashi Okuno, Hajime Tsukumo, Jonathan Boggs, Scott Cargle, Jeff Gimble, Wayne Grayson, Ed MacLeod.
Plot: Chieko Shiratori is devastatingly gorgeous as Rei. All the different actresses who have played the role so far brought something of their own to it, and in Shiratori’s case it is a calm, cool sense of superiority and assuredness. The relationship between Rei and the woman she’s protecting is handled in a surprisingly tasteful manner – based less on lesbian lust and more on the need of these two lonely women to connect with someone. Unfortunately, the film is talky and dull. Those expecting an action film will be majorly disappointed. At times, the image changes from “normal” shot-on-video to super-grainy, for no discernible reason. And then there’s the main villain, who is weird for the sake of being weird, and never interesting: almost every scene involving him is a complete waste of time.