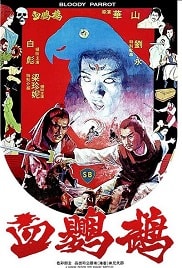 Bloody Parrot (1981) Online Watch Movie.
Directed by: Shan Hua.
Released: 1981.
Runtime: 92 min.
Genres: Action, Mystery, Thriller.
Countries: Hong Kong.
Language: Mandarin.
Also Known As: Xie ying wu.
Movie Info: IMDb.Actors: Jason Pai Piao, Tony Liu, Jenny Liang.
Plot: An expert swordsman is suspected of being the thief of a treasure sent to Emperor. The swordsman who has nothing to do with the theft investigates and is led on the trail of the supernatural “Bloody Parrot”. This leads to the “Parrot Brothel” and the star prostitute who walks around half naked. Strange things happen including a demonic possession, witches casting poison spells, disgusting autopsies and numerous sword fights. Then a dead constable turns into a vampire! This is all in the first 30 minutes