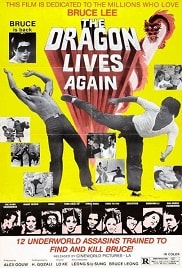 Deadly Hands of Kung Fu (1977) Online Watch Movie.
Directed by: Kei Law.
Released: 1977.
Runtime: 91 min.
Genres: Action, Comedy.
Countries: Hong Kong.
Language: English.
Also Known As: Li san jiao wei zhen di yu men, The Dragon Lives Again.
Movie Info: IMDb.Actors: Siu-Lung Leung, Ie Lung Shen, Ching Tang.
Plot: It’s one of the “Bruceploitation” films that were made to cash in on Bruce Lee after his death. The story follows Bruce Lee after he dies and ends up in Hell. Once there, he does the logical thing and opens a gym. After fending off the advances of the King Of Hell’s naked wives, he discovers that the most evil people in Hell are attempting a takeover, so Bruce sets out to stop it. As if it wasn’t weird enough, the evil people are: Zatoichi (the blind swordsman hero of Japanese film), James Bond, The Godfather, The Exorcist, Emmanuelle (the “heroine” of many European softcore porn films), Dracula, and, of course, Clint Eastwood (played by a Chinese guy). Aiding Bruce is The One-Armed Swordsman (hero of kung-fu films), Kain from the U.S. tv series, Kung-Fu (actually played by a Chinese guy this time), and Popeye the Sailor Man! Yes, Popeye the Sailor Man. He eats spinach and helps Bruce fight some mummies.