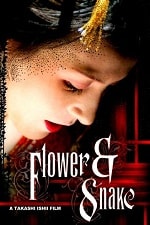 Flower and Snake (2004) Online Watch Movie.
Directed by: Takashi Ishii.
Released: 2004.
Runtime: 114 min.
Genres: Drama, Thriller.
Countries: Japan.
Language: Japanese.
Also Known As: Hana to hebi.
Movie Info: IMDb.Actors: Aya Sugimoto, Renji Ishibashi, Ken’ichi Endô.
Plot: Tôyama, a weak-willed businessman, is in debt to the Yakuza; they also have a video of him bribing a government minister. To clear his debts, he agrees to let them drug and kidnap his wife Shizuko, Japan’s queen of the tango, and subject her to the proclivities of a 95-year-old voyeur, who’s a Yakuza boss. After a masked ball, Shizuko is taken prisoner; she fights her captors, submitting only when the life of Kyôko, her female bodyguard, is threatened. Tôyama feels regret and seeks to buy back Shizuko, but by this time, she may be enjoying her situation. Is she, or is she pretending in order to protect herself and Kyôko? Would she want a way out if there is one?