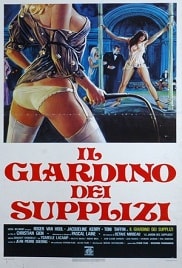 Le jardin des supplices (1976) Online Watch Movie.
Directed by: Christian Gion.
Released: 1976.
Runtime: 93 min.
Genres: Drama.
Countries: France.
Language: French.
Also Known As: The Garden of Torture.
Movie Info: IMDb.Actors: Roger Van Hool, Jacqueline Kerry, Tony Taffin.
Plot: A young doctor is forced to flee from Paris because he is involved in a drug scandal. On his passage to China he meets a beautiful, eccentric woman. After their arrival in China, she introduces him into a circle of decadent Europeans which created a torture garden for their amusement. While the bored imperial upper class is torturing the locals the revolution is rising.