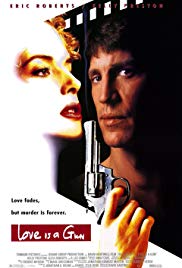 Directed by: David Hartwell.
Released: November 30, 1994.
Runtime: 107 min.
Genres: Crime, Drama, Mystery, Romance, Thriller.
Countries: USA.
Language: English.
Also Known As: El amor es un arma, Love Is a Gun.
Movie Info: IMDb.
Actors: Eric Roberts, Kelly Preston, Eliza Roberts, R. Lee Ermey, Joseph Sirola, John Toles-Bey, Jack Kehler, Harvey Vernon, Joan Stuart Morris, Peter Pit, Darryl Fong, Marshall Bell, Grant Cramer, Homeselle Joy, Frank Di Paolo.
Plot: The story is a good tale of suspense: Eric Roberts is Jack Hart, a crime scene photographer who is having some weird experiences with deja vu. Amused by a photograph of Jean Starr he finds at the station, he decides to hire her for his entries into the department photo contest, “A Woman’s Place Is…” As it turns out, the photos he has taken of her are pictures that have already been taken, though he can’t explain why he can foresee these things. Of course, weak-hearted Jack gets himself into plenty of trouble by becoming intimately involved with Jean, who is a bit demented and, not to mention married. What becomes the makings of a good tale of psychological suspense, however, eventually just evolves into one of jealous fiancées and weirdo mistresses with Jack at the heart of it all.