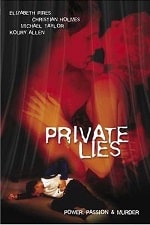 Directed by: Ellyn Michaels. Released: 2000. Runtime: 86 min. Genres: Drama. Countries: USA. Language: English. Also Known As: Private Lies, Mentiras Íntimas. Movie Info: IMDb. Actors: Elizabeth Pires, Tim Holmes, Michael Taylor, Brandy Davis, Koury Allen, Seamos Duke, Rae Ritke, Elizabeth Hayes, Lauren Collins, David Bacon, Victoria Espana, Jennifer Nicole, Lora Michaels, Talia Botone, Sindy Tennes. Plot: Thrillers with a bit of sex and nudity are quite my thing but this one is one big disappointment. It is difficult to convey how boring the sex scenes are and there are more than enough. The film starts off on an interesting scene in which the police arrive just as a woman shoots a man dead. The rest of the film shows how we got here. It seems that the wife wants to get off with another man and the husband wants to get off with another woman. Unfortunately, the other people are also married. The answer, off course is murder, but as with this sort of film, nothing is quite what it seems and there is a neat twist at the end. The film goes something like this. After the opening scene, the wife is having sex with her lover, then she phones her husband who is having sex with his lover and then there is some dialogue and then the wife has sex with another man and then some dialogue and then she has sex with her lover and so it goes on. At some point during the proceedings there is a murder then some more sex until the end - yawn. The sex scenes were the usual soft-core bobbing up and down in different positions with sleazy music for accompaniment. Give this one a miss. Download Private Lies (2000) Full Movie Online Server 1: Fembed Download Link