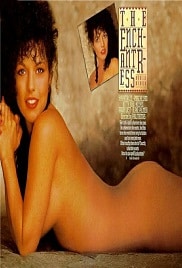 Directed by: Paul Thomas.
Released: 1991.
Runtime: 83 min.
Genres: Drama.
Countries: USA.
Language: English.
Also Known As: The Enchantress.
Movie Info: IMDb.
Actors: Hyapatia Lee, Blake Palmer, Don Fernando, Ashley Nicole, Kiki, Porsche Lynn.
Plot: Paul Thomas’ The Enchantress tells in two parts the story of enchantress Hyapatia Lee seducing two different men under different circumstances. She doesn’t play the same character in each, but pays the same role to each of the men. The first part is entitled “The Yearbook” and stars Blake Palmer as Philip, an art director. As the film begins he has a very hot session with girlfriend Melissa (Ashley Nicole) before breaking up with her. He goes on a job interview with Miss Alexander (Hyapatia Lee) who “never mixed business with pleasure“. Knowing this, he invites her to his house to look over some of his plans, which of course leads to copulation. After a regular boy/girl scene, they spice things up by adding Porsche Lynn as Hyapatia’s secretary to the works. This is scene is especially hot as Blake cums on her pussy and then him and Porsche lick it off of her.